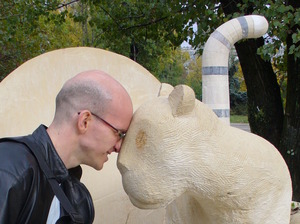 dexonline
dexonline is the online Romanian dictionary. I launched the project in August 2001 and, with the help of an amazing team of volunteers, it grew to 400,000 definitions. It runs exclusively on free software and its database is freely available under the GNU General Public License. The entire page and links are in Romanian only.
Links:
dexonline.ro
blog, for random non-technical rants about the project's evolution
stats
trafic.ro ranking
Dixit, a neat tool for browsing the definitions offline

Civvic.ro
Civvic.ro aims to offer a free, searchable, versioned archive of Romanian laws, bills, decrees and government ordinances. One particular interest is to allow the user to browse all the versions of a legal act, including all its ammendments, and to highlight the differences between consecutive versions. Civvic.ro is in its infancy, but we are beginning to pick up speed. The entire page is in Romanian.
Links:
Civvic.ro
Archive of Monitorul Oficial, the official gazette of Romania

Nilatac
Nilatac is a suicide chess engine I wrote back when "free time" had a meaning. It is active 24/7 on FICS, where it is one of the better suicide programs, and its opening book is available online. Suicide chess, despite its morbid name, is a fascinating game; some say it rivals classical chess in complexity. It is played on a standard chess board, but the aim is to lose all your pieces (and captures are mandatory). I haven't worked on Nilatac for a while, save for minor opening research. But I dream of the day when I will. Nilatac is free software.
Links:
Nilatac
Nilatac's opening book
Colibri, a rewrite of Nilatac with browsable 5-men endgame tables
FICS, the place to go for online chess

Music
In my spare time I typeset some Romanian choral scores. I used Lilypond, the music notation software. All the resulting scores are free for you to copy, modify and/or redistribute. They include Christmas carols, folklore, and a complete score for the Orthodox liturgy in Romanian.
Links:
Romanian choral scores

Toy Projects
These are random things that I've worked on.
Links:
Cityo, a restaurant review site for Bucharest. Currently in Beta.
Yams, a dice game I wrote to learn GTK. Also available via svn.

Family
Naturally, I have more family members than these (in fact I have a large and vivid family), but here are the ones with web pages:
Links:
My dad Sorin (Romanian)
My brother Cristi
My sister-in-law Andreea

Romania
That is where I'm from. I'm glad to have seen the world, but I'm even gladder whenever I go back there. Romania is a 22,000,000-people country in Eastern Europe, bordering the Black Sea, slightly smaller than the UK. Pope John Paul II once called it Garden of Virgin Mary. We love soccer, alcohol and good jokes and we know the meaning of dolce far niente better than most. But we've been known to work occasionally and accomplished many good things. There are many superb corners in this country; the following links are to places that I happen to love.
Links:
Virtual Romania will one day be the ultimate guide to Romania (work in progress)
Petru Vodă is a monastery founded in 1991. More photos here
Sighişoara is one of the best-preserved medieval towns in Europe
Cluj-Napoca is a major city in Transylvania
Ascension of the Lord is a Romanian Orthodox church in San Leandro, CA

Academics
I'm a proud MIT nerd. Before that, I was a mediocre student at the Politehnica University of Bucharest, where I failed five classes in three years. I decided that I would rather transfer to MIT and leave the country than retake those exams. Before that, I went to the High-School of Computer Science in Bucharest, during some of its best years. I also taught there for one year, which I greatly enjoyed.
Links:
MIT; classes I took there
Politehnica University of Bucharest; classes I took there (and didn't fail horribly)
High-School of Computer Science
I started this mailing list on programming problems in 1998.
I ranked seventh at the 2001 ACM finals with the MIT team
I won a silver medal at IOI '96
The funny side of MIT: IHTFP Hack Gallery (well, MIT is always very funny)

Free software
To put it plainly, none of my computer science work could exist without free software. My main accomplishments so far, DEX online and Nilatac, rely completely on free software. Even this web page is created and served using dozens of free programs. I have profited a lot from free software and I tried to give something back. I believe that software should be free and that our understanding of copyright and software patents should change. So, like, bow down to free software, or something.
Links:
The Free Software Foundation, sponsor of the GNU Project
The philosophy of free software, including simple explanations
Richard Stallman, founder of FSF and the GNU Project
No Word Attachments in emails: a small step you can take to help free software
I reserve the right to ignore email messages containing attachments in Microsoft formats.
Copyright and globalization, a fascinating talk by Stallman
Courtney Love does the math, an article about RIAA's practices
Famous cases: Dmitry Sklyarov (verdict), Niels Ferguson, Edward Felten, DeCSS
DMCA, the Digital Millennium Copyright Act. Section 1201 (a) is scary.